Arson is a very serious problem as each year hundreds of lives are lost and millions of dollars in property damage occur as a result of arson. It is important that law enforcement officials have every tool possible to combat this costly and sometimes deadly crime.

Since 1997 The City of Carbondale Fire Department has had a unique tool to help combat this problem, Arson K9s. The program began with Arson K9 “Beau” who served from 1997 until 2006. Arson K9 "Pal" began in 2006 and served until 2014. Currently the Department's Arson dog is Kermit who started serving in 2014 to the present day.

Arson K9s are trained to detect minute traces of accelerants that may have been used to set a fire. The K9 teams are trained and certified through the Maine Criminal Justice Academy. The Arson Dog Program, sponsored by State Farm Insurance, has successfully demonstrated that Arson K9s have a direct impact on deterring arson related crimes.

The program was established in 1993 in conjunction with the Maine Criminal Justice Academy through the sponsorship of State Farm Insurance. Since the program’s inception there have been more than 250 K9 Teams placed in 43 states, District of Columbia and Canada.

Benefits of the Dog Program

As a requirement of the Arson Dog program, Arson K9s must train daily and attend an annual re-certification where scent discrimination abilities are tested. K9s are an important tool used to guide the investigator during the examination of a fire scene. Any evidence collected is then submitted to a laboratory for verification.

The use of a K9 provides a tremendous benefit in terms of time and cost savings. K9s are also an excellent addition to any community’s fire prevention and education programs. Arson K9s are typically Labrador Retrievers, chosen because of their superior ability to discriminate scents, genial disposition, and “love to work” type attitude. 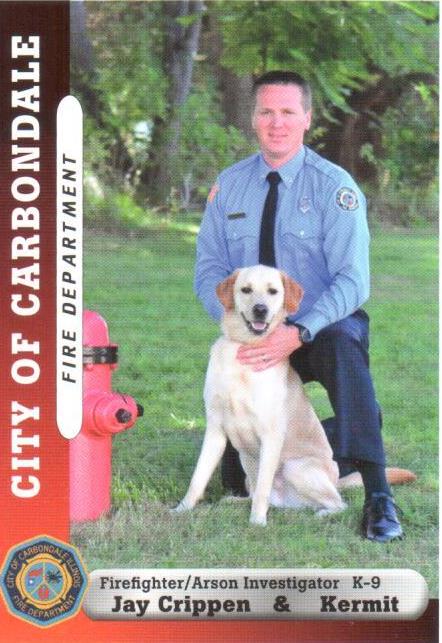